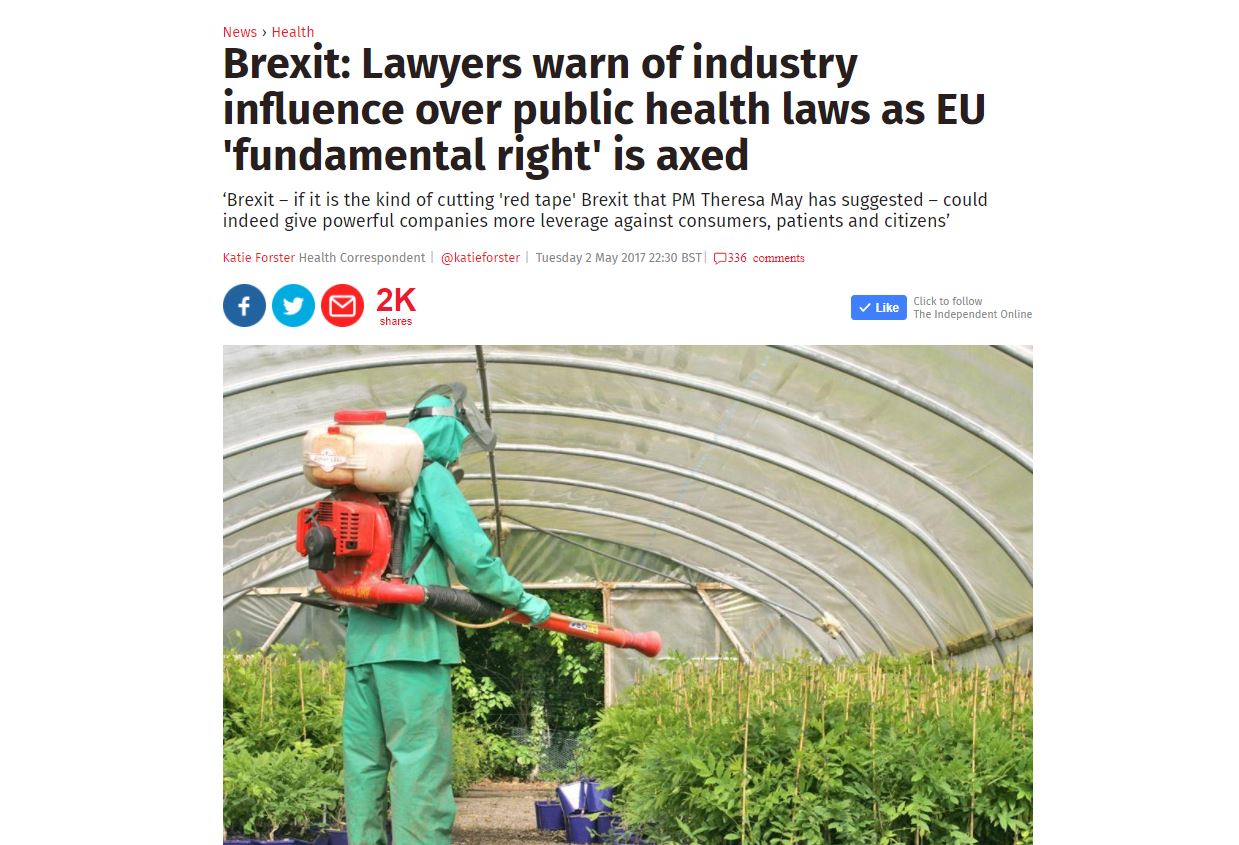 People in Britain risk losing their “fundamental right to health” after Brexit, a barrister and public health professor have warned.

Tobacco and alcohol companies could win more easily in court cases such as the recent battle over plain cigarette packaging if the EU Charter of Fundamental Rights is abandoned, they wrote in the British Medical Journal (BMJ).

This means after Brexit, industry could have greater influence over laws regarding “pesticide residues in food, health and safety at work, management and disposal of hazardous substances, regulation of medicinal products, and air and water quality.”

Tamara Hervey, a law professor at the University of Sheffield unrelated to the editorial, told The Independent: “Brexit – if it is the kind of “cutting ‘red tape’ Brexit” that PM Theresa May has suggested – could indeed give powerful companies more leverage against consumers, patients and citizens”.

The Government’s white paper on the Great Repeal Bill says the charter, which sets out the rights and freedoms of EU citizens, will not be converted into UK law.

The document was published the day after Theresa May started the Brexit process by triggering Article 50 and contains proposals as to how the country will function after the UK has left the European Union.

It states: “The removal of the charter from UK law will not affect the substantive rights that individuals already benefit from in the UK” – but Peter Roderick and Allyson Pollock said judges who have used the EU rights to decide on public health cases may no longer be able to do so after Brexit.

“The value of this charter was shown last year, in both EU and UK courts, when the tobacco industry unsuccessfully challenged the new rules on plain packaging of cigarettes,” wrote the researchers from the Institute of Health and Society at Newcastle University.

The right to health, as set out in article 35 of the charter, was used in cases at the EU Court of Justice and the High Court in London to counteract tobacco industry arguments that the new plain packaging legislation was in violation of its rights.

It was also used against the Scotch Whisky Association in a legal battle over minimum alcohol pricing in Scotland.

The Government has said the charter will automatically not apply when Britain leaves the EU and that the rights are also covered by international agreements not affected by Brexit, such as the European Convention on Human Rights (ECHR).

But Mr Roderick, a lawyer and principal research associate at Newcastle University, and Professor Pollock, the institute’s director, said currently exisiting public health laws introduced after Brexit would have to be interpreted “without the charter’s protections”.

They added that the ECHR protects many civil and political rights through the Human Rights Act, but does not include the “economic and social rights” such as the fundamental right to health.

“The real protections for public health and inequalities that the charter represents will be set aside if the present government is re-elected in June and its plan to ditch the charter goes ahead,” they warned.

“All those concerned about public health and social solidarity need to ask their parliamentary candidates to oppose the Government’s plan and to amend the Great Repeal Bill after the election in order to keep the charter’s protections.”

Professor Hervey said the potential loss of the charter was “just one of the many negative impacts of Brexit on health.”

“Other more immediate and pressing impacts are highlighted by the House of Commons Health Committee – including the danger of having no health expertise at the negotiating table; and the distress and uncertainty for thousands of people who rely on EU law to access health care, and people from the rest of the EU who provide health care within our NHS,” she said.